Originally built as the Buchanan Arms Hotel in 1871, it provided fifteen rooms on three floors and, at the rear, stables and a coach house. The Hotel was closed following a poll taken in 1920 under the Temperance Act when the village voted by 672 to 500 to go dry. The building was thereafter bought by the villagers for use as a Village Institute, being later converted in 1958 using funds raised to Commemorate those killed in the Second World War, as a Community Centre. Ownership was then transferred from the community to the local authority. This building has remained in use as the Community Centre and the Public Library up until the present time. Due to the developing structural problems, referred to below, it has been necessary to restrict access to some rooms in recent time.

Architectural comments: The original building is two storeys high to the street with a basement storey accessible from the rear where the ground slopes abruptly to the NW. At some point in the twentieth century an attic storey has been added.

The masonry of the street facade, now painted, is of coursed blocks with moulded dressings, e.g. rusticated quoins, architraves, eaves cornice. The main entrance to Lochwinnoch Road is pilastered with a corniced entablature block. Above the entrance at first floor is a shallow canted bay window. A plain string course runs at door cornice level. Lintelled windows are single or bipartite. The main street facade returns in a short slightly concave bay to Smithy Brae, the ground floor window in this curved return having a consoled cornice. Walls on the Smithy Brae gable and at the rear are random whin rubble. A tall round-arched window lights the building’s single internal staircase on the rear elevation.

The attic extension maintains the vertical wall plane of the Lochwinnoch Road facade and the prevailing disposition of windows but is otherwise all too evidently an addition. Canted bay attic dormers light this second floor at the rear. The roof is slated with planar hips negotiating the concave return on plan at Smithy Brae.

The building is not listed.

If the building’s architectural quality is unremarkable, in townscape terms the Community Centre/Library does make a strong contribution by maintaining the heel-of-the-pavement street wall from St James Terrace and across Smithy Brae to Burnside Place. Between the tenements of St James Terrace and the SW gable of the Community Centre/Library are two single-storey shops rendered somewhat anomalous in scale by their neighbours.

The Property Survey commissioned by Inverclyde District Council reports that ‘the condition of the building is not good’. There is serious penetrating and rising damp in the property, some settlement of floors and structural repairs have had to be carried out on the staircase.

The seriousness of these findings, together with the substantial investment needed to upgrade the building to satisfy current legislation, renders the Community Centre beyond future.

It is, however, important to note that the War Memorial incorporated in the ground floor hall should be retained and reinstated in any new development.

This is the former Kilmacolm Primary School built in 1887 to a design by J L Cowan at a cost of some £4,000. Accommodation in nine high-ceiling classrooms provided for around 600 children who had the benefit also of separate playgrounds & play sheds for boys and girls. In 1974, when a new primary school was constructed in Pacemuir, it was abandoned for approximately 7 years, before being extensively refurbished and adapted for community use as a Village Centre, although the upper floor accommodation was never opened and is in need of some completion work to bring it into use. Interestingly, the 1980’s refurb. appears to have been very sensitive to preserving the original design, layout and features, as practicably possible.

Architectural comments: The building is a substantial symmetrical structure of two high storeys, the classrooms and hall lit by tall single and bipartite windows, some on the ground floor having stone transoms. The school is built in coursed whin rubble with dressed sandstone at the margins. Window ingoes are chamfered and there are several strong hood mouldings. The upper storey windows to the NW, NE and SW are surmounted by gablets, that at the centre of the Lochwinnoch Road facade the largest with a faint Jacobean flavour. The roof is slated and has steep hipped slopes. Four dressed sandstone chimneys rising from the main cross walls of the plan accent the skyline. Internally there are twin central atrium staircases with half landings/mezzanine levels, lit by a central glass roof lantern.

The building is not listed.

The building is robust in form and fabric. Its scale matches the tenements at St James Terrace opposite and Lyle Buildings to the SW, and, though its plan is not precisely in parallel with the former or alignment with the latter, its general size and position strengthen the village-centre street-sense of this stretch of Lochwinnoch Road.

‘a significant building of some merit which must be preserved’.

Serious consideration of the careful rehabilitation of this building would seem to be a sensible priority in any new community provision development. Its potential in terms of layout, floor space and sectional division is considerable.

It is also one of the best, good quality, unique, unmolested Victorian buildings that exist in Kilmacolm, therefore it should be respected and protected from future disfigurement by inappropriate extensions and alterations.

Following the removal of the School Master’s House, a temporary classroom building was erected fronting Lochwinnoch Road, adjoining the original school building. Over the ensuing period since the relocation of the Primary School in 1974, this building has been used by the Independent Evangelical Church and as a Day Centre for senior citizens.

Architectural comments: The building is a single-storey, six-bay timber-shed structure originally supplying ‘temporary’ educational accommodation and later adapted to local social need. The building is timber-framed with horizontal boarding on wall panels and gable. A shallow pitched roof is felted. There is nothing to commend this ‘temporary’ structure whether on architectural or townscape grounds. Indeed, on both counts, its contribution to the village scene is wholly negative. The building is not, of course, listed. No case can be made for retaining this shed in any new development. 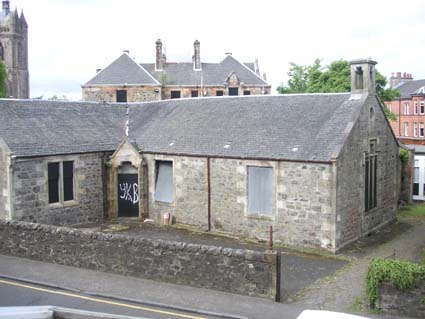 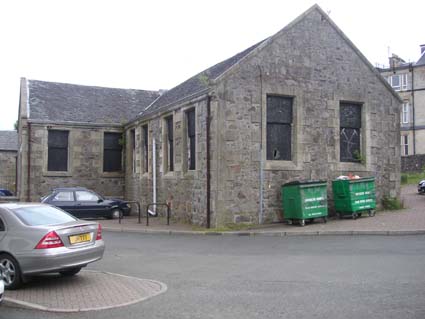 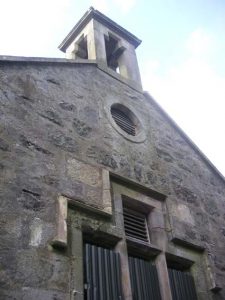 Located at the junction of Bridge of Weir Road & Lochwinnoch Road, this single storey stone building was constructed in 1873 under the instruction of the Kilmacolm School Board. It consisted originally of two classrooms, later augmented by a further two. However, it soon proved to be inadequate and the later school building was started in 1887. The original school was then used as Public Halls and in more recent years, following the demolition of the attached School Master’s house and erection of a temporary classroom unit, was leased for use as an independent Evangelical Church and Day Centre. For some time now the surviving single-storey gabled building, broadly cruciform in plan, has been vacant, boarded up and debatably beyond economic refurbishment.

Architectural comments: The school is constructed of coursed whin rubble with dressed quoins, eaves moulding and chamfered window surrounds. All gables are skewed and have skewputts. Interesting minor features include a bellcote at the apex of the north gable; a masonry tablet inscribed ‘Kilamcolm (sic) School Board’ on the east gable and a gablet over the entrance porch, which is obliquely set in the NE re-entrant.

Unlike the Community Centre / Library or the Village Centre buildings described above, which are strongly street-related, this older structure is lower in scale and, in townscape terms, an ‘object building’ set in the open gushet site at the intersection of roads at the village Cross. The construction of the tenements on St James Terrace and those at Octavia Buildings, Bridge of Weir Road, and the erection of the adjacent school, all of which are street-wise and essentially of three-storey scale, have radically and irrevocably altered the nature of the village centre from its original mid-nineteenth century rural character. This has left the old school more than a little ill at ease. The building is not listed, though perhaps were it to find itself in an older lower-scaled rural environment it might merit a C category listing.The Inverclyde Council Property Survey records saturated walls, poor roof timbers, wet and dry rot, and the need for a ‘high degree of repair’.The disposition of the plan, the scale of the building and the poor condition of the fabric suggest that this structure is unlikely to form part of any new improvements in community services. Nevertheless, the building’s historical value argues for the retention of certain fragments as memorial elements to be reincorporated in future development, viz. bellcote, tablet, gablet.

UPDATE – On 2nd December 2005, this building was given a C category listing by Historic Scotland. Certain restrictions now apply to its future modification and use. For details of these restrictions see: Planning – Listed Buildings (Scotland) Act 1997

THE CAR PARK BEHIND THE VILLAGE CENTRE 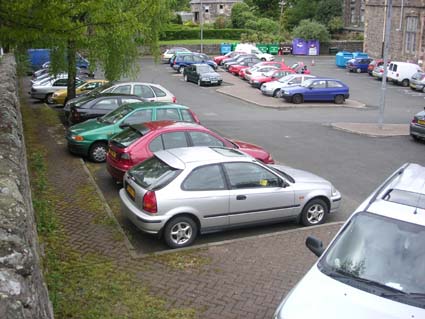 See Future concepts for details on how improvements may be achieved.