Kilmacolm has continued to maintain its popularity as a high quality residential area into the 21st century and is steadily increasing its population against a background of a decline in the population of Inverclyde as a whole. There continues to be an active programme of new-build housing by several developers in both Kilmacolm and Quarriers Village. If current trends continue, the above figures should be at least 5000 and 7500 respectively by the year 2020. This gradual increase in the population of the area is an important consideration when establishing future community facility needs.

Regarding the age distribution of the village population (during 1999), the following key points should be noted: Senior Citizens: Nearly one quarter of the population are over 60 years of age and of these there are 308 elderly people living alone. Currently there is limited provision of services to support these individuals. Young People: There are nearly 500 young people between 16 and 24 years and, from 2001 Census statistics, 477 between 12 and 20 years. Because Kilmacolm has no community services or activities specifically provided for young people, they are increasingly at risk of involvement in alcohol and drug abuse and antisocial behaviour. Single Parent Families: Around 120 children under 15 years old live in single parent households. 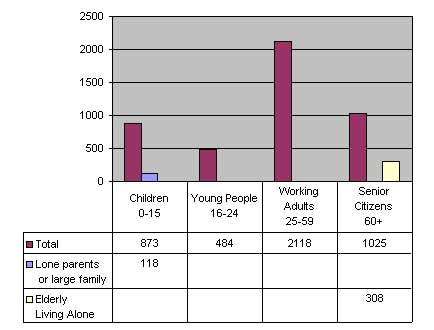